Blackberry season here in Northern California had me feeling like I was in heaven! I discovered early in July that wild blackberries in this region are plentiful if you know where to look! One sunny Saturday it was 102 degrees outside and I decided I was going on a hunt for wild blackberries! I ventured out with my giant pink bucket and sneakers that I only wear if I absolutely must (because honestly, who likes wearing closed shoes when it’s hot outside?). I spent five hours driving around town, under train trestles, by the lake, down back roads and dirt paths, discovering the best hidden spots and picking berries to my hearts content (there may or may not have been trespassing involved). On the first day, I ended up with four pounds of berries, and eventually, ten jars of jam, a freezer full of frozen berries and multiple tasty blackberry desserts.

I think the biggest hit in the treat department was my Wild Blackberry Pie, baked for friends on the Fourth of July! If you’re fortunate enough to have wild blackberries growing near you (or any kind of berry for that matter), do yourself a favor, get outside, breathe in the fresh air, bask in the sunshine and pick those babies until you can pick no more! Also, watch out for spiders. 😉 It is so rewarding to be able to enjoy something you worked hard to obtain, and to delight those around you with sweet treats as well! 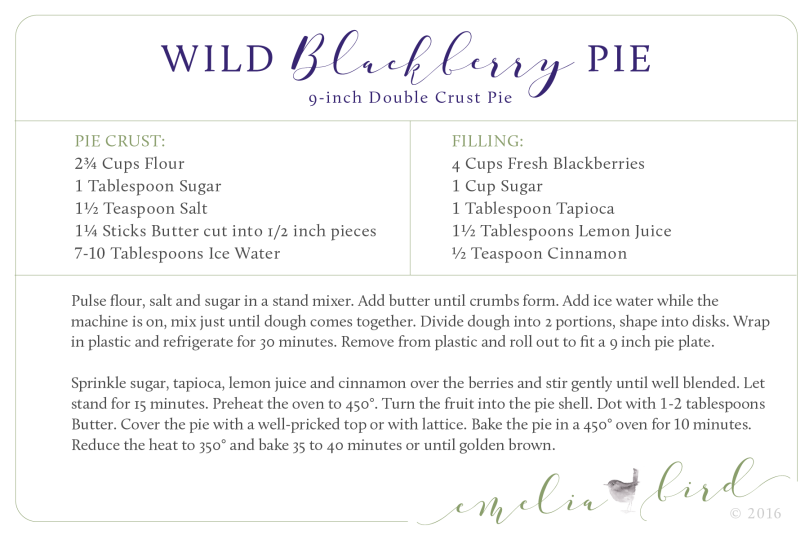 Hi, my name is Emily! Artist / designer and lover of all things creative, delicious, handmade and beautiful! This blog is a collective of my everyday life, recipes and things I love. Thanks for visiting!

Back to top
Jillian Harris
the whole food diary

A husband and wife journey in loving our bodies with what we love to eat.

Baking and cooking recipes for everyone

(Inside A Black Apple)